Hank Moody, the protagonist of Californication, represents a very unusual type of anti-hero to root for: he’s neither a stylish-yet-troubled mobster living “the life” like Tony Soprano or Michael Corleone nor a morally-gray private detective or cop surviving an underworld full of worse characters. On the contrary, Hank lacks most of the “forbidden” characteristics that make anti-heroes appealing to begin with, such as having the capacity (even the right) to kill as something ordinary. Despite that lack, Hank still engages viewers, quite frankly turning them into the morbid followers of his questionable antics as he makes himself a womanizer, a charismatic cynic, a lousy husband/partner, a trying father, a self-destructive jerk, and a self-defeating writer who squanders his talent—a bundle of tags and misconducts that one could argue amount to a single definition of “human,” which would then explain why it’s so appealing.

Nevertheless, I would like to propose that Hank in fact stands as an unethical person when put through a philosophical examination, not one based upon traditional moral standards but one according entirely to Hank’s own values.

First, let’s not confuse unethical with immoral. Morality refers to a sense of right and wrong stemmed from customs and traditions—in other words, from societal circumstances. Ethics, on the other hand, has a more individualized significance (Greek ethos: home, dwelling), with unethical etymologically meaning “not or without a home,” thus qualifying a behavior and actions depending on how much they make a person “feel at home” within oneself.

Hank Moody’s reckless behavior fails precisely at that, making him feel unhappy and disappointed at himself during his moments of clarity, which also proves his actions and demeanor to be unethical under his own standards.

The core of his unethical issue corresponds, however, to two specific shortcomings of Hank’s personality when applying an ethical/unethical test to his entire array of questionable conducts. For instance, his womanizing passes the ethical test because not only is Hank comfortable with it, but it actually befalls  him more than he actively pursues it. In other words, women do throw themselves at him—he only puts in an effort to establish relationships with “the good ones.” His personas both as a charismatic cynic and as a jerk belong completely to his being, so they are ethical by default. Moreover, his self-destructive antics of heavy drinking and general trouble-making shouldn’t be tested, since they’re both offshoots of his true problem. 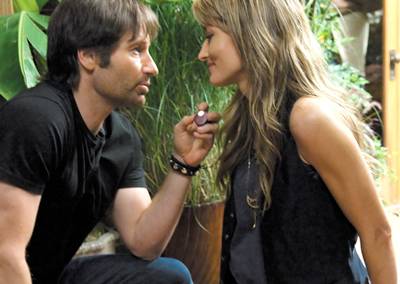 Hank’s defects and mistakes as a marital partner for Karen first fulfill the unethical  requirements of the since, for Hank basically lives a miserable life without Karen—or so it seems when first examined. The case strikes as more complex when analyzed with more detail. There exists a tricky paradox about Karen from Hank’s perspective: she cannot stand being with him as long as he under-performs as a father for their daughter Becca and he squanders his talents as a writer by not writing; meanwhile, Hank claims both that he cannot write well without his muse Karen and that their separation prevents him from being a proper (present and positive) role model and parent for Becca—both shortcomings being the core of Hank’s unethical existence and the origin of his other problem and general unhappiness. In short, Hank does lament losing Karen, but mostly because that translates into his incapacity (whether personal or circumstantial) to be a good father to Becca and his abandonment of his writing—both which, ironically, account for Karen’s estrangement, at least since the beginning of the series’ plot-line (as of season 4, there has been no clear-cut explanation of Karen’s original motivation for leaving Hank, who clearly has gone in decline from that point on).

Ultimately, Hank doesn’t have a home not only because he lacks a familiar time and place when and where Karen and Becca live with him as a family, but also because he doesn’t feel  at home within himself not being a good father and not being a writer. Luckily for Hank, it seems that just becoming, without excuses, the father and writer he aspires and struggles to be, all his unethical behaviors and bad feelings would be uprooted. Unfortunately and ironically, in order to do so timely and effectively, he would have to get over his inspirational dependence on and emotional attachment to Karen—precisely the first person to make him feel completely at home.