Over the past year I’ve delved deep into the wild territory of studying terms and taxonomies of art-science collaboration and integration, which led me to discover that there exists a lack of practical, ‘universal’, and non-academic models to measure the representation of science in both art and fiction (in general, not just sci-fi). That discovery prompted me to develop a test and a quadrant model that may help in gauging how well a certain artwork, piece of literature, television series, or movie depicts science and how relatable/approachable they make it for the general public.

Inspired by the Bechdel Test, this version seeks to assess the fidelity with which science is represented in works of fiction by measuring them against a standard characteristic of Jules Verne’s masterpieces. In order to pass the test, a narrative has to:

In all of his most-renowned science fiction classics, Verne always included a protagonist who was a scientist and who would address real science throughout the story for the benefit of other characters and the readers; for instance, in TWENTY THOUSAND LEAGUES UNDER THE SEA and FROM THE EARTH TO THE MOON. This may seem like a very basic measure, and yet it’s one that many science-related fiction works fail to pass, either because the scientists are one-dimensional secondary characters or because the explanation of the “science” is completely bogus (most of STAR TREK’s concepts) or undecipherable to the general public (Christopher Nolan’s INTERSTELLAR and INCEPTION toe that line).

The ultimate point of the Verne Test, just like Bechdel’s does for gender equality, is to set a bare minimum requirement for a fairer and more openly relatable representation of science in fiction.

This new model seeks to measure the representation of science in works of art and fiction, and it derives from the categories already well explored and established by scholars, writers, and fans: the hard and the soft sci-fi, combined with Donald Stokes’s Pasteur’s Quadrant. However, the terms related to the two dimensions of the model have been adapted to cover artworks, art-science projects, and even fiction beyond the sci-fi genre. The model doesn’t work when trying to classify in detail and depth the art-science intersection; on the contrary, this is intended as a basic measure to assess how significant science is for a narrative or artwork. 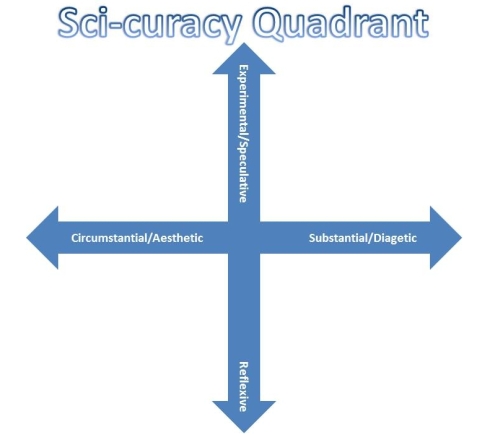 This dimension differentiates between science and technology that merely contribute to the aesthetic of a work of art (like in Jennifer McCormick’s x-ray ouvre) or are circumstantial to a story (for instance, in GOLDFINGER), and science that stands out as integral either to the meaning and functioning of the artwork (the Seismofon at the Science Museum of Minnesota) or to the plot (Isaac Asimov’s works).

Using STAR WARS to illustrate the point, EPISODE IV: A NEW HOPE belongs to Substantial/Diagetic, since the construction of the Death Star, a technological endeavor, is crucial to the plot. On the other hand, EPISODE V: THE EMPIRE STRIKES BACK falls in Circumstantial/Aesthetic, for it deals mostly with the politics of the Empire vs. the Rebellion and with Luke’s training as a Jedi—all the advanced technology is incidental.

This second dimension appraises whether the work attempts to experiment artistically with the science/technology, speculates about the potential of scientific/technological developments in the narrative, or simply presents a question or point of reflection about the implications of science and technology. Rupert Cox’s sound films and the book-turned-into-film THE MARTIAN would be examples of the Experimental/Speculative, while the movie BICENTENNIAL MAN and the dance projects of Seth Riskin would exemplify the Reflexive.

Ultimately, neither the Verne Test nor the Sci-curacy Quadrant is meant to be definitive, but I think they are more effective and broadly applicable to representations of science in our cultural context than other existing options—and certainly may stand out as more understandable to the public in general.