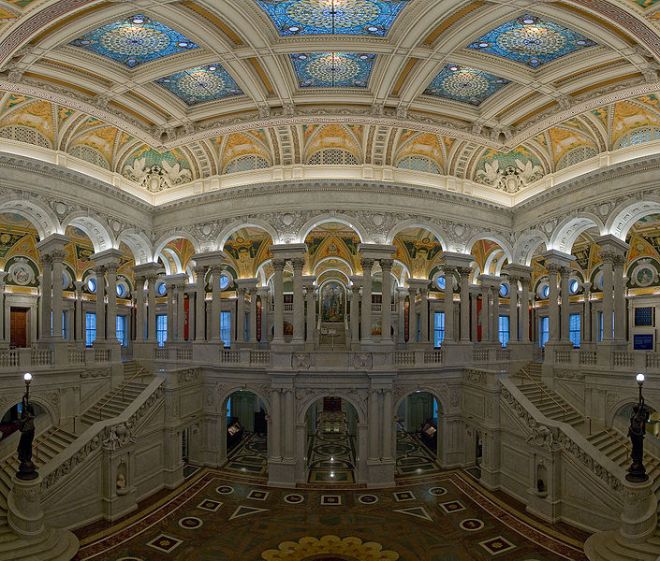 Despite the metal detectors, x-ray machines, and guards at the security checkpoints, the Library of Congress still feels to me simply as what Thomas Jefferson probably deemed all libraries—as temples of knowledge. That might be a clichéd understanding or interpretation of libraries; nevertheless, the Library, as a symbol, remains as a site of respect and to be respected. If it truly lacked that symbolism, the Library wouldn’t warrant the level of security assigned to it, for only sacred places and symbolic sites require to be secured from those willing and eager to tear the symbolism asunder, be that of a government building (attacking its authority), a museum (trivializing its reverence), or a temple (transgressing its sanctity). Meaningless places, on the other hand, simply are not worth disrespecting.

It’s a curious thing that the Library somehow holds all three symbolic values at once, since it “belongs” to Congress while serving as a vault to historical artifacts and human knowledge as a whole. Yet, to me, the Library stands first and foremost as a temple to worship wisdom.

Those who might not share my view and who might regard the Library more as a museum would be wrong and right at the same time. They would be wrong because a museum, to our modern (and probably superfluous) understanding, signifies a place where objects are stored for display and study (at best), which to a degree implies certain detachment from those objects—they can be pieces of history or art or science to admire as such and nothing else. Considering that understanding, the Library does not qualify as one, for it is true that it contains works of all those fields of knowledge, but they exist to be used as tools to further knowledge itself rather than to be admired as snapshot-like pieces of the puzzle of history and knowledge—and that’s why that simplistic understanding of the Library would be wrong.

However, regarding the Library as a museum would be right too if “museum” were interpreted as its old meaning of mouseion, the Greek “shrine of the Muses.” That interpretation would be correct not only because it is supported by the etymology itself, but also because the architecture of the Library supports that view. The frescoes adorning the walls and the effigies populating the halls of the Jefferson building exist to vest the Library with the spirit and ambience of a temple—one that could be honoring the Greco-Roman or the Judeo-Christian pantheons, but that instead honors knowledge itself and its contributors (as proved by the main reading chamber, with its sculpted pillars and stone savants).

Ultimately, the Library does not represent a museum of sterile objects and pure observation. On the contrary, the Library stands as a museum, the abode where Muses dwell treasuring and fostering wisdom—precisely a place of worship (as Whitman listed) “for the admirable communes of literary men and composers and singers and engineers and savants” (p. 34).