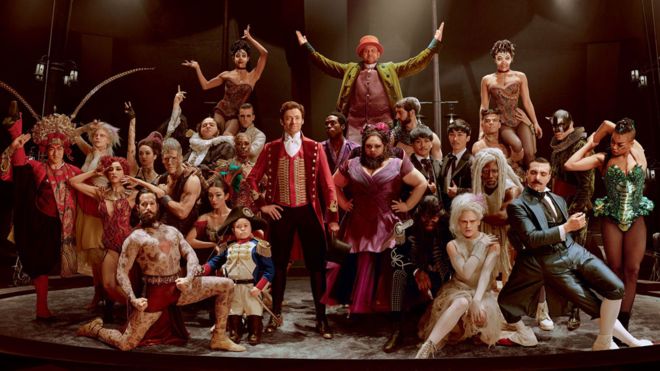 One of the 2017-2018 “Awards Season” movies that recently had moderate critical acclaim and box office success was the musical The Greatest Showman, based on the life of P.T. Barnum and his establishment of The Circus as popular/mass entertainment.

The film very obviously illustrates Garland-Thomson’s visual rhetorics of disability, for P.T. Barnum fabricated an industry of spectacle precisely out of “abnormal” people and bodies. In that way, both the story and history present rhetorics of the wondrous, the sentimental, the exotic, and the realistic through the troupe of misfits of the circus, both as a group and in their individual plotlines. Simply put, the(ir) story has readings and impact at multiple levels: inspiring in how they go from pariahs to celebrities; sentimental in the mistreatment and challenges they have to face publicly and privately; a celebration of the exotic as basis of their success; and a stark reminder of the realities of 19th century society and its chilling mirrors/echoes with current trends.

However, the multiplicity of stories/personalities in the film, particularly that of the romantic subplot between P.T. Barnum’s high-society partner and the acrobatic Black woman, point to a harsh reality—that all difference from the hegemonic normal is considered as a disability, not only those of a physical or physiological nature. In the film, as well as in true societal terms back then and now, the Black acrobat was considered as much of a “freak” (that is, disabled) because of her race as the Bearded Woman or the Fattest Man on Earth. Under that framework, the discourse of (any) difference in identity becomes one and the same as that of disability under the rhetorics explained by Garland-Thomson’s work. And that applies across cultures wherever one standard has an hegemonic and privileged presence, not only in the Western white-privilege world; otherwise, there wouldn’t be wonderment, sentimentality, and surprise (and at times disgust or contempt) at redhead visitors in Japan.

Ultimately, how can we revert/subvert/re-appropriate such rhetorics in ways that break out of the “disability” framework and understanding that has pervaded and perverted our identities within society?