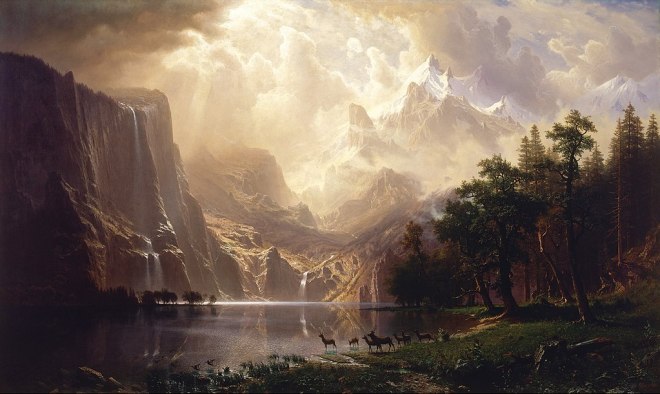 How to begin to understand humanity’s relation to physis, one that has no beginning and no end because humanity belongs to physis and because physis transcends delimitations of time? In his hymn “As on a Holiday…” (AH), Friedrich Hölderlin perhaps gives us a glimpse towards understanding, for the poem represents a manifestation of physis while unfolding our relation to physis through the power of poetry “For those who have ears to hear, the warning song” (AH).

Hölderlin begins evoking images of nature that represent timelessness, from rain and thunder to a Heraclitean running river to green groves and Bacchus’ grapevine, all witnessed by both “the countryman” (German: Landmann ‘man of the land’) who belongs to Nature and the Poet who sings to us about it all. The Poet goes on to re-present Nature, physis, making sure to reaffirm Nature’s transcendence as “miraculously omnipresent, / God-like in power and beauty… older than the ages // and higher than the gods of Orient and Occident… begotten… on holy Chaos” (AH), thus not only singing but divining (or rather, meta-divining) Nature, making her more than divine and intuiting beyond of what’s seen, for poets “are always divining” (AH).

“A fire has been lit in the soul of the poets” (AH), Hölderlin claims right after his dividing ode to Nature, reminiscing of the fire of apostles and messengers and placing his fellow poets among such dutiful ranks. The poets of Hölderlin’s hymn not only carry “The thoughts of the communal spirit… in the poet’s soul” but also find the “all-alive, all-animating powers of the gods” (AH) because those stand out “more meaningful and more audible to us” (AH)—only poets can translate between the divine and the human, “the works of gods and men, / To bear witness to both, the song succeeds” (AH).

Ultimately, we humans, oh so humans, may attempt to “grasp the Father’s ray” and “approach to see the Heavenly” (AH), in a misguided effort to appropriate physis and impose our nomos, our measure, upon Being. Instead, the former tasks belong to the poets, those “wrapping in song the Heavenly gift / To offer it to the people” (AH). “Fellow poets, to us behooves to stand” (AH), the Poet sings—to stand out between the Heavenly and the Earthly, to exist as interpreters who sing that which cannot be said of our relation to physis, and to make our own being and time a holy-day through poetry, one of our own making.