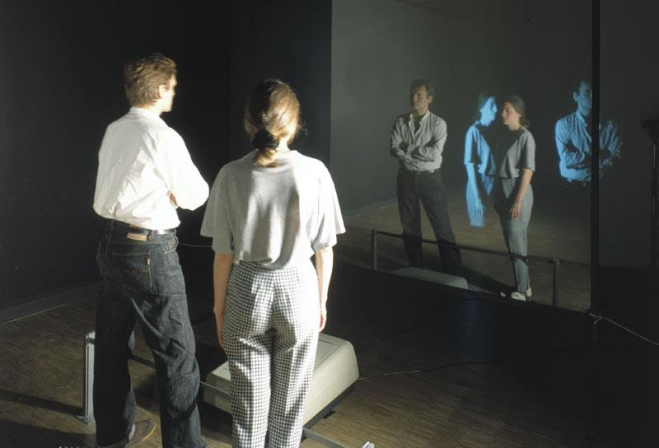 How to define the interaction between an observer and a work of art, not only in cases in which the artwork requires physical participation from the observer, but also in cases in which observation alone happens? Perhaps the former cases, those of artworks that are by design physically interactive, allow for a better understanding of the whole participation experience for all works of art in which conscious observation itself affects both the observer and the artwork. Peter Campus’s Interface (1972) stands out as a prime example for analysis and appreciation in such terms, since it stands firmly on the border between physically interactive and consciously observational for experiencing the work of art.

In the new media piece by Campus, first showed in 1972 and since then exhibited in several locations throughout the decades, a sheet of transparent glass is set vertically in a dark room, functioning as a screen and mirror. Behind the glass, a camera records loop video from the observer standing in front of the glass, which a projector then recreates upon the glass. The observer therefore sees an image of the themselves on the glass thanks to a mirror effect achieved by the low light setting of the room, while at the same time the projected image of themselves also appears on the glass. Because of the optics involved and Campus’s intention for the piece, the image of the observer becomes an active (more accurately, interactive) element of the work of art—one that changes with the position of the observer, and which then the observer can manipulate consciously to see different combinations of their image upon the glass, either overlapping or separating the mirrored and the projected version of the self.

With such a simple set-up (the common electronic devices notwithstanding), Campus accomplishes to draw the observer into the experience of Interface first with a touch of awe thanks to the multiple images of the self which the observer faces. Subtly, though, as soon as the observer realizes that the work of art requires not only to be appreciated as it is but to be participated in, then the observer can make conscious decisions about how to move to affect the images observed, and in doing so, experimenting and crafting their own experience with the piece, perhaps generating their own questions of identity and self-image as they play with their reflections and projections of themselves in front—artistically and interactively becoming whole and apart, all according of how and where they stand and what they choose to see and interpret, just like all works of art are experienced by any observer, but made more obvious by the reality of Interface.

Because of its use of cameras and portrayal of captures images in the moment, Interface is reminiscent of Frank Gillette’s and Ira Schneider’s earlier work Wipe Cycle (1968), which also forced the observers to become a part of the work of art by capturing their images with closed-circuit cameras and transmitting them in an array of televisions. While Wipe Cycle was not as immediate and consciously participatory as Interface, still the pieces share a dimension of observer complicity in the making and giving meaning of the work of art beyond the observational—a trend distinctively ingrained in new media art. Likewise, Piotr Kowalski’s Field of Interaction (1983), which required a room and an intricate system of lights and sensors, required observers to move through it to experience the changes of the lights—which depended on the movements of the observers themselves in relation to certain mathematical formulas. In a sense, Piotr’s take on art and the world corresponds to, as mentioned by Edward Shanken in Art and Electronic Media, “the entire world is itself a field of interaction, as all processes, objects, and beings affect each other and shape their intertwined destiny…Both art and science have an equal say in the ultimate nature of the reality created in his works” (p. 109).

In fact, Interface and the physically interactive works of art that came before and after it provide not only a conduit for understanding how we experience a work of art but also a parallel to the big enigma (both philosophical and scientific) of the role of consciousness and participation in quantum mechanics. Just like the observation of a quantum phenomenon affects its outcome, observation affects the work of art, whether it be by making  the observer become an element of the piece, by letting the observer control an aspect of the experience, or by merely adding to its potential field of meanings that which unfolds from the experience of the observer. After all, according to physicist J.A. Wheeler in Quantum Theory and Measurement (and referenced by Roy Ascott and Edward Shanken in Art and Electronic Media), one could “cross out the old word ‘observer’ and put in its place ‘participator.’ In some strange sense the universe is a participatory universe” (p. 28). In any work of art, and especially in pieces like Interface and Field of Interaction, the observer, the audience member, deserves the title of “participator” more than that of observer or bystander, since one doesn’t stand by or outside the experience of art, but rather, in Martin Heidegger’s words, “within the openness of beings the happens in the work” (p. 65); and if quantum physics are the rulebook of nature, then it’s suitable that those rules may influence or help explain some aspects of art itself, “for in truth, art lies hidden within nature; he who can wrest it, has it” (Heidegger, p. 68). Therefore, the observers conscious participation, much like that of the scientists with his quantum experiment, creates and recreates the experience of the work of art as “a field of possibilities…’ambiguous’ situations open to all sorts of operative choices and interpretations” (Eco, p. 44). The quantum experiment for an artist is a work of art, one in which art “is the becoming and happening of truth” (Heidegger, p.69). But as an experiment with many observers, such as Interface, and thus a multiplicity of truths, just like the mirrored and projected images within the piece, it’s best to heed to the words of quantum physicist Werner Heisenberg “that what we observe is not nature in itself but nature exposed to our method of questioning” (p. 32).

Ultimately, Interface and its kindred new media art may not define or explain but rather represent better what interactivity means in relation to art in general—a quantum experience in which our observation exists as participation that affects the aesthetics and meaning of the work of art. After all, as quantum physicist Niels Bohr stated, “in the great drama of existence we ourselves are both actors and spectators” (p.81).