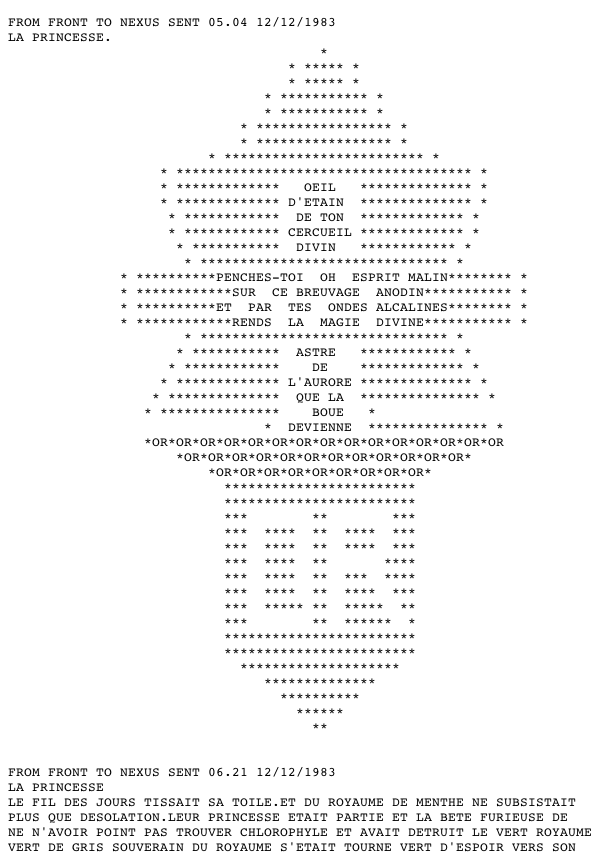 How to understand the semiotic determination of a work of art, particularly considering the interactive quality of art itself? While such understanding must include the matter of authorship, perhaps a better way to assess its dimension would be to consider the work of art as a dynamic system—a case of deterministic chaos that requires participation from both author and audience in order to unfold its meaning in a stochastic fashion (with randomness playing a part). Roy Ascott’s La Plissure du Texte, with its massive collaborative scope, interactive play, and technological dependence, lends itself to an exploration on those terms to find an understanding of its semiotic determination.

La Plissure was part of the “Electra” exhibition at the Museum of Modern Art in Paris in 1983. At the core of the art work, Ascott wanted to create a “planetary fairytale” with the collaboration from people worldwide through a computer network. For three weeks, people in Europe, the United States, and Australia independently contributed fragments of the fairytale, acting as characters or submitting images created with ASCII text, which then was printed out and assembled. The result is a narrative that mixes words, stories, images, and ideas beyond what a single person or small team could’ve authored, making for a global epic of multi-perspective proportions.

In experiencing La Plissure, one first ought to consider and appreciate the “distributed authorship” (as expressed by Ascott, according to Edward Shanken [p. 125]) that allows for a certain expansiveness of the work of art itself, encompassing a plethora of artistic intentions and interpretations. However, despite the plurality of the elements in La Plissure, ultimately there exists a certain finitude or boundary to that authorship—precisely one of stochastic dimensions. While each contributor participates as an independent individual in the authorship of La Plissure, (and put in Albert Einstein’s words “each individual particle executes a motion which is independent of the motions of all other particles”), the participation is constrained by the circumstances and parameters of the work of art and its environment, so the randomness of the authorial participations is stochastic. In other words, the text could be random in its presentation (e.g. language, images, metaphors), determined only by the individual contributor, but it couldn’t be so random that the printer would suddenly output a rock or a toilet (literally and physically) instead of text on paper. Alcott’s framing of the work of art allowed for randomness to play its part in the distribution of authorship, thus opening the creation and the meaning of the piece, but it couldn’t be infinitely random either.

Similar projects with distributed authorship also expose this dimension of works of art as dynamic systems of semiotic determination. For instance, Antonio Muntadas’ The File Room (1994), which focused on cases of censorship, turned the contributed submission of people who had experience censorship around the world into the work of art itself. Muntadas’ work, just like Alcott’s, allowed for a level of randomness that wasn’t infinite, but that could and should be considered as an openness of the creation and interpretation of the artwork. Jane Prophet’s and Gordon Selley’s TechnoSphere (1995), in which users create creatures that inhabit a virtual environment, would be another example of a piece which derives its value not only from the participatory element but also from the stochastic quality of the meanings generated by, within, and because of the work of art and the rules/system set for the authorial participation.

The approach taken in La Plissure, particularly that of distributed authorship and art as work-in-progress in a sort of controlled chaos bring forth another important aspect of openness in works of art: that “art’s substance could be its transitoriness” (Adorno, p. 3). Put more lyrically, according to Adorno, “The work is at once the quintessence of relations of tension and the attempt to dissolve them” (p. 292). In other words, in the participation lies the substance, both the meaning and the object, of the work of the art. La Plissure encompasses not only the “planetary fairytale” that was produced, but the entire process behind it—which was, by most formal definitions, a deterministic chaos where a change in the initial conditions created a wide variety of outcomes. Specifically, the change in participating authors, who all had the same starting point of participation but different backgrounds, allowed for a random-yet-determined set of contributions to La Plissure. Explained in chaos theory terms, “Two states differing by imperceptible amounts may eventually evolve into two considerably different states,” as stated by scienties Edward Lorenz, and in the case of Le Plissure and any work of art, the multiple states mean the multiple creators of meaning (be that authors or audiences) that start off with the same work of art but that derive different perspectives according to small changes in backgrounds and circumstances.

Ultimately, there’s an inherent distributed authorship in all works of art, for contributors (like in the case of La Plissure) and those who experience the piece as an audience act as creators of meaning for the piece, since “to create is to cause something to emerge as a thing that has been brought forth” (Heidegger, p. 58). Semiotic determination (or indetermination) ought to be understood as a dynamic system in which “my existence or that of things consist of the pure and mutual dynamism of the event…Things happen to me just as I happen to them” (Ortega y Gasset, p. 67), “things” in the case of art referring to both the work of art and the meanings or truths it may unfold. The truth within Ascott’s La Plissure du Texte reminds us that artworks, with their chaotic determinism and multiplicity of meanings, may be better understood simply as “a field of possibilities…open to all sorts of operative choices and interpretations” (Eco, p. 44).

Einstein, Albert. “”On the Movement of Small Particles Suspended in a Stationary Liquid Demanded by the Molecular-Kinetic Theory of Heat” Investigations on the Theory of the Brownian Movement. New York, New York. 1926.